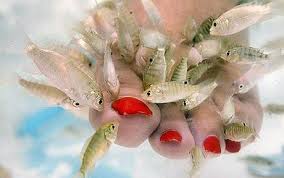 A strange new service was imported to the U.S. from the middle east a few years ago.  With a fish pedicure, you place your feet in an open tank filled with numerous small carp that eat away dead skin from between your toes.  This service has been banned in various states, including Washington.

The fish can carry infectious bacteria that causes serious injury to skin and soft tissue, and cross contamination can happen if you place your feet in the same tank where an infected person has been.  This process is especially dangerous for anyone with diabetes, cancer, or autoimmune disorders such as AIDS.  It is risky to place your feet (some spas offer full body treatments) in tanks where schools of fish produce biologic waste that can cause infection through any open wound.

State law requires all pedicure implements to be sanitized in between clients, and it is impossible to sanitize live fish, or the tanks they inhabit for this procedure.  Though intended to be toothless,  these fish have been known to grow teeth that can draw blood during a pedicure treatment.  Furthermore, these fish are starved in order to excite them to nibbling the dead skin between your toes, and that is simply animal cruelty.

This is obviously a fad treatment that everyone should avoid.