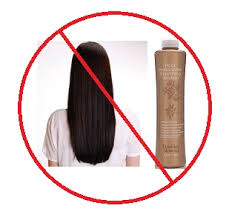 The Washington State Department of Labor and Industrues (a division of Occupational Safety and Health) in affiliation with the Oregon Department of Consumer and Business Services and Oregon Health & Sciences Universtity, have issued a Hazard Advisory for salon products used in keratin-based hair straightening services.  Laboratory tests were conducted by accredited labs in both Oregon and Washington and results show that several brands of keratin-based hair straightening products, such as Brazilian Blowout, contain enough formaldehyde or methulene glyccol (another form of formaldehyde) to cause concern.  Use of these products have been shown to release formaldehyde vapor into the air during salon use.

Formaldehyde is a human carcinogen, the National Research Council (NRC) says in a report released August 2014.  It upholds a federal classification of the chemical that industry has vigorously disputed.

Exposure to formaldehyde is linked to nasal cancer, leukemia, eye and skin irriation, breathing difficulties, rashes, permanent chemical sensitization, and other problems.  Nasal cancer and leukemia typically show up years after exposure.  The health risks increase the more the products are used.  Some of the noted products were found to release formaldehyde during use, even when the the product ahd labels and other information claiming no formaldehyde content.   To find out which products were tested, you can review the lab results showing the hazards in a technical report from Oregon OSHA:  www.orosha.org/pdf/Final_Hair_Smoothing_Report.pdf .

The multi-state investigation into unsafe hair straightening products began after hair stylists reported adverse health impacts from use of Brazilian Blowout products.  After publcation of the technical report following the investigation, and after hazard advisories were issued, Brazilian Blowout attempted to remarket its products with claims of new formadlehyde-free formulations, but The Art of Hair will not use any of the products form that manufacturer due to the history of bad business practices.