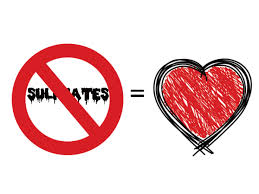 Commonly, shampoo and personal care items have sulfates as primary active ingredients.  Sulfates are detergents (even used in industrial applications like cleaning engine grease) that can remove oils and other substances that are not water soluble. Sulfates provide abundant lather and clean well, but they can damage your hair.  Sulfates can strip hair color.  Sulfates can cause scalp irritiation, burning and itching, for people who are chemically sensitive  and for people who have exzema or psoriasis.  Sulfates can increase dry scalp flakyness and cause stinging of the eyes.

It is not necessary to have a lot of lather in order to get the hair clean.  Shampoos that lather too much can actually leave residue behind in your hair, which can have a dulling effect and leave hair a little heavier than more clean-rinsing products. Sulphate free shampoo will effectively and gently clean the hair without causing damage.

Sulfates are not listed as a known carcinogen themselves, but they do contain components that have potentially carcinogenic properties. Sulfates contain trace amounts of dioxane 1,4, a known hazard to human health and likely cancer causing agent.
Sulfates refers to sulphur salts, mostly found in soil and natural water, and in industrial, domestic or municipal waste. The sulfate ion carries a negative two charge and is usually the conjugate base of the bisulfate. They are prepared by dissolving a metal in sulfuric acid. They are irritating in part because they’re small molecules that can penetrate the skin.Sodium Lauryl Sulfoacetate is not a sulfate. The derivatives are different than those in Sodium Lauryl Sulfates (but commonly confused).  Sodium Lauryl Sulfate is a chelating detergent that is put into shampoo to create lather (or bubbles). Sodium Lauryl Sulfoacetate is also a chelating detergent, but is a natural ingredient.  Sodium Lauryl Sulfoacetate is now being safely used to replace the harmful Sodium Lauryl Sulfate in Shampoos that are labeled “Sulfate Free.”   Here’s the breakdown of each word:Sodium is a counter ion. Lauryl simply refers to a type of oil from the coconut that is 12 Carbon units long (olive oil is made of oleic acid that is 18 Carbons long). Sulfoacetate refers to the water loving part of the molecule. Sulfur helps the acetate (vinegar) portion of the molecule create more stable bubbles and softer lather.Another ingredient that replaces sulfates in shampoo is Disodium Laureth Sulfosuccinate.  It is also not the same as a Sodium Lauryl Sulfate (or any other Sulfate surfactant). Disodium Laureth Sulfosuccinate is known to be very gentle to the skin. Structurally it is a considerably larger molecule than many other surfactants and belongs to a category known as anionic surfactants, meaning that it has a negative charge. The safety and mildness of Disodium Laureth Sulfosuccinate lies in the absence of a sulfate ion head, which is commonly found in many other surfactants. The sulfate ion, which originates in sulfuric acid, is replaced with the more stable and safer sulfonated ester.
The Art of Hair offers quality sulfate free shampoos for better results in home hair care.
August 24, 2014
Go to Top